In partnership with the Indianapolis Airport Authority, the Arts Council of Indianapolis manages the award-winning temporary exhibition program at Indianapolis International Airport. The Arts Council curates rotating installations in closed cases in the main terminal, commissions new work for the video screens above the main escalator/staircase, and operates a long-term loan program for large sculpture outdoors in the North Terminal Garden. 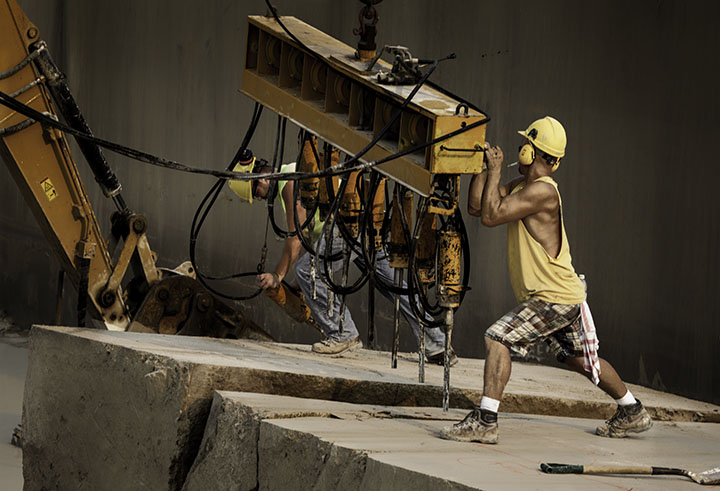 The Ticketing Hall cases host two photography exhibitions. Bloomington, Ind. based nature photographer Tom Duffy’s exhibition, Harvesting Limestone, is a collection of his photographs of the famed limestone quarries of his home city. The exhibition gives the viewer a behind-the-scenes look at the process of gathering the natural material of limestone, which we frequently see displayed on so many architectural marvels across the country. It is also a sensitive portrait of the humanity of the often-ignored quarry workers, whose difficult task it is to wrench the stone from the earth. 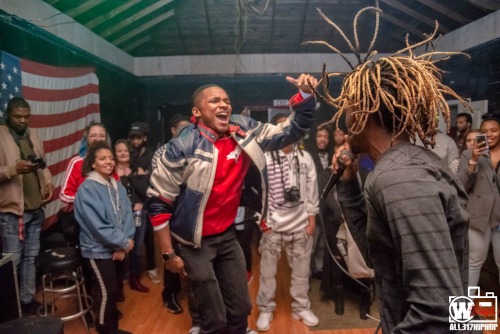 Keith “Wildstyle” Paschall’s exhibition, Indy Hip Hop Music, provides a personalized perspective on hip hop music culture in Indianapolis and the people who are actively creating the scene. Wildstyle, a musician and long-time hip hop producer as well as a visual artist, was concerned that the individuality of these storytellers and their audience wasn’t being documented. He took it upon himself to create a photographic archive of the singular culture of Indianapolis hip hop, including both concert action shots and artist portraits. 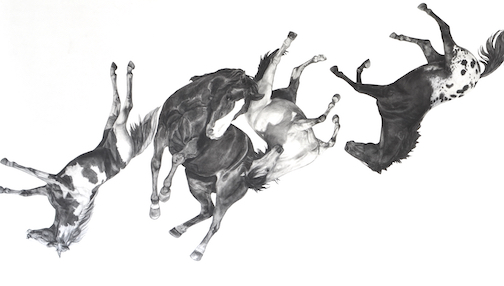 In the Concourse B display case, Heather Vickers presents a “mural” containing graphite drawings of wild horses. The horses are shown tumbling head over heels against a stark, white background. They symbolize health and strength, and their tumbling movement is representative of the challenges life can present. Vickers, who teaches at Purdue University in West Lafayette, aims to convey that even powerful minds can be upended by circumstances over which they have no control.

From January to June, 2020, the screen above the main escalator/stair to Baggage Claim will host a work of video art by Indianapolis-based artist Carla Knopp.

Morning on Earth presents an altered-state glimpse into a mysterious cosmic event. Celestial spheres seek order among the relics of a past civilization; our viewpoint calmly circles around to witness a glowing sunrise through an empty glass vitrine.

The piece was previously shown as a 360-degree video, viewed through virtual reality goggles or projected onto spherical viewing screens. This current version premieres at IND as a traditional screen-based video, where its dream-like reverie echoes the disorienting renewal of travel.

Morning on Earth (v.IND) by Carla Knopp from Arts Council of Indianapolis on Vimeo.


Carla Knopp is a native of Shelbyville, Indiana and received her B.F.A. from the Herron School of Art and Design, IUPUI. As a video artist focusing on creating Cinematic VR (virtual reality) pieces in digitally invented space, she has presented her original work at Gstaadfilm: International Festival for Short Films, at the Cairo (Egypt) Video Festival, at Virginia Tech’s “Cube Fest,” at the University of Massachusetts’ Revolutions Per Minute Fest, and at Brooklyn’s Plexus Projects among other local and national venues. Along with frequently presenting exhibitions of her sculptural and painted work, Knopp is the owner of Olgaforce3D, a studio for experimental design in 3D printing and digital video projects. She lives and works in Indianapolis. 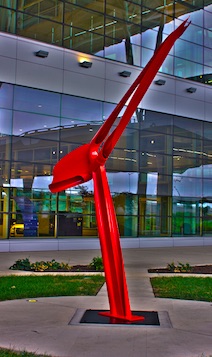 Tussle, by Chicago artist Ted Sitting Crow Garner, is on view in the North Terminal Garden.

Proposals are currently being sought for indoor installations at Indianapolis International Airport: visit our Artist Opportunities website for more information.