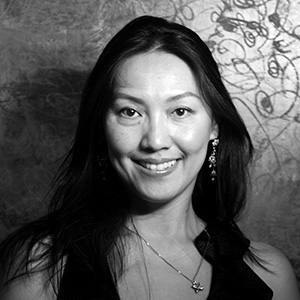 Nhat Tran, whose passion for painting began early in her life, uniquely employs a painting medium that is unfamiliar in the US but multiple millennia old in Asia: organic lacquer (or urushi), a sap tapped from various Asian trees with strong adhesive properties. This unique artistic practice has earned Tran respect throughout the nation. Most notably, the Smithsonian American Art Museum holds one of her paintings in their permanent collection, and she has produced the largest urushi mural in the United States, “On the Tip of Our Wings.”

“Into the Bones” was Tran’s opportunity to challenge herself with complex 3-dimensional models. Her plan was to produce a large collection of wild animal bones and antlers in astonishing compositions that exploit urushi’s enzymatic ability to bond to bone collagen. Tran believes the allure of the project goes beyond its contributions to the visual arts world; it will cause us to think about “artworks that convey new forms for everyone’s contemplation, a contemplation where the bones or antlers lose their original purpose and begin originating something they were never meant to convey while alive.”

Working with bones presented a new challenge for Tran, but the DeHaan Artist of Distinction Award allowed her to experiment artistically “without worry about what the outcome would be.” She describes the process of giving life back to dead animals as “magical and emotional.”

“To achieve this, I believe creativity and imagination are the first and most crucial factors. It was deep conversations back and forth with each of them that shaped their distinctive characters.” Tran thanks support from the DeHaan Award for renewing her way of thinking and painting, which has renewed her energy.

This email address is being protected from spambots. You need JavaScript enabled to view it.
(317) 631-3301
Privacy Policy