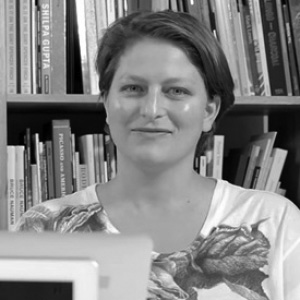 Lauren Zoll’s professional practice consists of three major bodies of work, all using the medium of black paint. But painting is not where her career began. As a young adult, Zoll began making art with film photography before transitioning into blacksmithing and metal art. She received her formal education from Cranbrook Academy of Art, studying installation art, metalsmithing, and architecture. Early on in her career, she sold commissioned metal pieces for clients but stopped to pursue painting. During Zoll’s Creative Renewal Fellowship, she first started experimenting with black beans and the resulting ink, which inspired her DeHaan project: to create a series of black bean ink paintings and public art works that mimic the process of photosynthesis.

“Inspired by making drawings during the day and the love of cooking to feed my family, I developed ink from something I love to cook – black beans,” explains Zoll. This ink is also known as Anthocyanin dye, which water-soluble red to blue pigment that comes from a flower or plant and that produces electrical energy. This dye, when used on nano-sized titanium white paint, absorbs ultraviolet radiation, capturing the highest frequency of light. Zoll’s work crosses boundaries in science, technology, horticulture, design, and art.

Zoll thanks the DeHaan Award for supporting her, “especially at a pivotal time in adapting to motherhood,” to develop her experimental ideas. “Recreating photosynthesis is what I have captured through this body of work, resulting in juicy, organic paintings that have an ability to produce quantifiable amounts of energy.”