Much of Brazilian native Samantha Ortiz’s textile-based work in this exhibition is focused on healing herself and inviting others to heal themselves. Viewers may do so by using the energy she considers to be imprinted in her artwork during the focused process of making her tactile, intimate art objects. Ortiz uses “slow” handmade techniques such as stamping, stitching, hand-dyeing, and painting to imbue her often wearable or interactive work with a sense of the considerable time spent creating them. Through her artwork, time and memory become touchable. Ortiz’s own effort, memories, and healing thoughts are shared with the viewer through their interaction with the work.

Beginning in 2017, the Arts Council partnered with the Christel DeHaan Family Foundation (CDFF) to create the annual DeHaan Artist of Distinction Award to promote, celebrate, recognize, and reward excellence by supporting aspirational and innovative projects by contemporary, professional visual artists in central Indiana.
View a 3D tour of the exhibition. 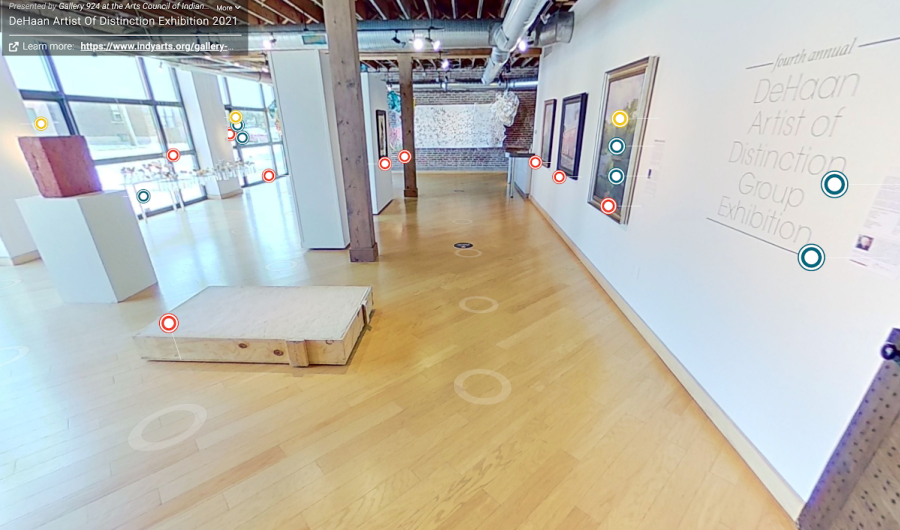 Valerie Eickmeier explores themes surrounding environment, landscape, water, and human impact on nature. Her long-term interest in these topics eventually grew to focus on juxtaposing the wholeness of an environment with snapshots of distinct places, atmospheric qualities, and moments in time. Since 2019, she has created several series of paintings and woodcuts that represent places and weather events using satellite images of land masses, waterways, ocean currents, and large river deltas. This process allows her to imbed scientific data in a visually expressive way. In this new work, she investigates mapping as an artform by selecting physical features of a geographic area to convey a message or metaphor about the powerful effects of climate change.

Fifteen Indianapolis-based artists will explore the role that art plays in driving awareness of complex social issues such as police brutality, gentrification, migrant workers' rights, climate change, fast fashion, and other causes that are significant to them. The show, co-curated by artists Matthew Cooper and Israel Solomon and Gallery 924 staff, was inspired by the visual conversations that artists created on downtown Indianapolis' boarded-up storefronts as part of the 2020 Murals for Racial Justice project.

Art and Activism is part of a collaboration among the Arts Council, the Indiana State Museum, and the Indianapolis Public Library to honor the one-year anniversary of Murals for Racial Justice.

June 5-Sept. 6: RESPONSE: Images and Sounds of a Movement, an Indiana State Museum exhibition featuring six murals that were created last summer in downtown Indianapolis as part of an immediate response to the worldwide protests against police brutality.

The Arts Council thanks Glick Philanthropies for its generous support of the Murals for Racial Justice project, which includes the partnership with the Indianapolis Public Library and the June 12 panel discussion.

February through April of 2021, the windows of Gallery 924 featured two works on canvas by Indianapolis painter Matthew Cooper, the 2021 Art & Soul  Featured Visual Artist. Matthew's narrative works feature an investigation of Black history, life, and culture through his own personal lens. 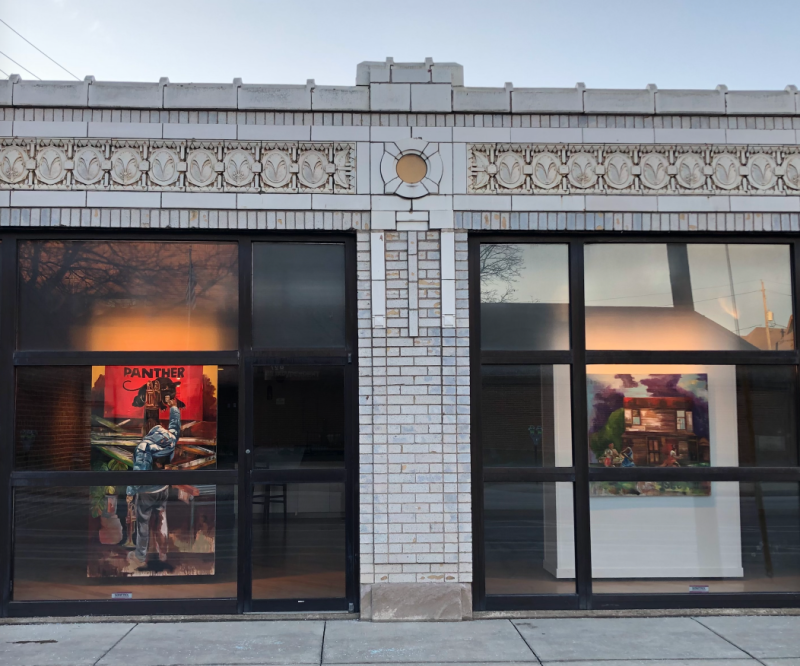 Matthew Cooper is a self-taught visual artist who studied drawing and Africana studies at the IUPUI Herron School of Art and Design. He reads as much as he can about a subject before he re-creates it on canvas: “I want to give life once again to our untold history.”

The Arts Council of Indianapolis and Gallery 924 are pleased to offer high quality giclée prints of the artwork, Industrial By-Product of the Black Identity, by 2021 Art & Soul Featured Artist Matthew Cooper.

Shipping is available for an additional $18.50.

Even though our popular annual Gallery 924 show went virtual, we still made a big deal about TINY 2020. December 4 - January 8, patrons shopped for original artworks created by TINY artists at the new Art Center Marketplace hosted by the Indianapolis Art Center.

This year's virtual event featured 265 pieces by 29 artists, including:

Thank you for supporting local artists, while adding to your own art collection or buying unique holiday gifts for friends and family. 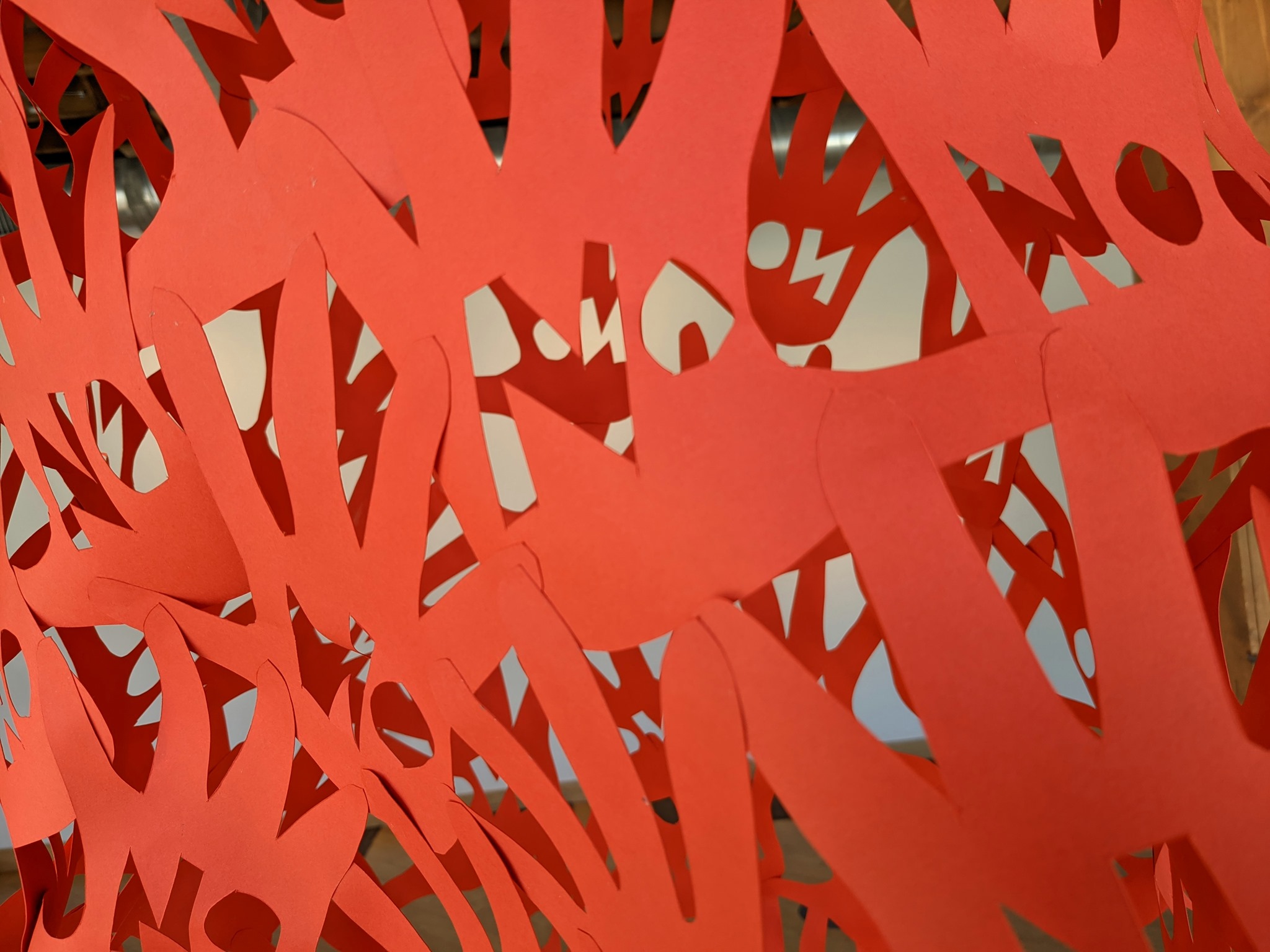 In partnership with Women4Change Indiana, Gallery 924 presented El Tendedero/The Clothesline Indiana: Homage & Celebration, an exhibition honoring the work of women and organizations all over central Indiana to bring awareness to the issue of violence against women and children. The project is inspired by internationally known Mexican feminist artist Mónica Mayer.

The exhibition featured the works of three Indianapolis-based artists. Darlene Delbecq, Beatriz Vásquez, and Samantha Veach. Veach, a photographer at Newfields, documented a year of art and activism as Women4Change traveled the state to host events and inspire discussion and introspection into the pervasive issue of sexual harassment and violence against women and girls. Delbecq shared a series of portraits of artist Mónica Mayer and new conceptual work around women's bodily autonomy. Vásquez created a large-scale papel picado-inspired installation that explores the collective impact of multiple voices all sounding the alarm against the long history of violence against women along the border.

Sales of artwork in the show raised money for Women 4 Change Indiana and the Indiana Coalition to End Sexual Assault and Human Trafficking.

View the virtual tour below.

Take your Gallery 924 experience to the next level! Learn more.