The Arts Council of Indianapolis has partnered with Transit Drives Indy (TDI)  on a multi-year creative placemaking program, activating artists and arts partners in order to help create a new culture of public transit in Indianapolis.  Thanks to a grant from Transportation for America (T4A), Indianapolis is now part of its national Cultural Corridor Consortium.

In 2018, 3CIndy is impacting the Red Line Rapid Transit during its construction period, and to included the assistance of an artist in the planning of the Purple Line Rapid Transit.  Plans for 2019 are in progress. 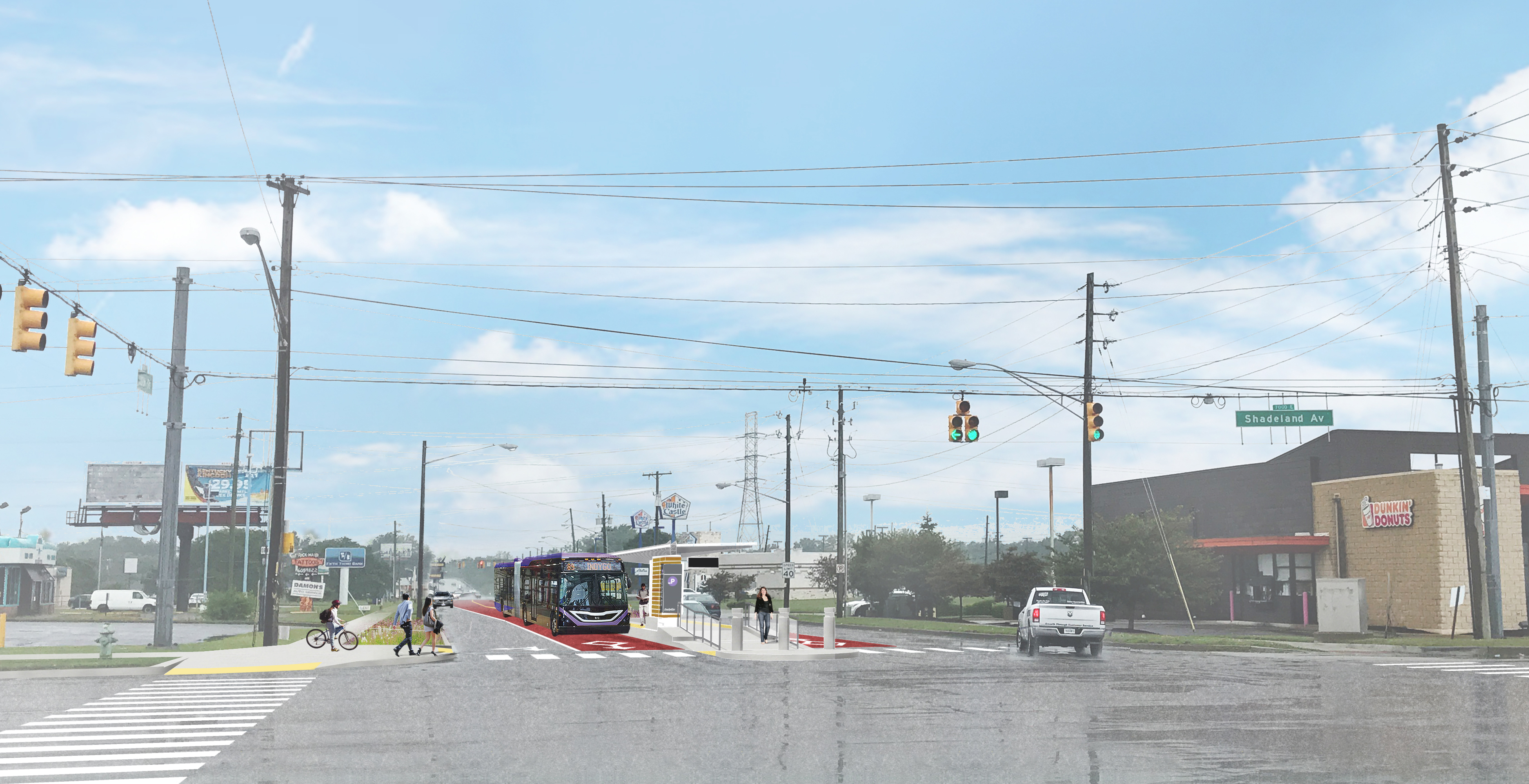 The artists selected to develop projects for the Red Line are:

Big Car Collaborative
Big Car is located near the future Shelby and Southern Red Line stop, and they have been working in this neighborhood for several years through conversations, data tracking, evaluation and planning engagement. Accordingly, they chose to focus their work on the Red Line stops along Shelby at Raymond St, Southern Ave, Troy Ave, and Hanna Ave, all part of the South Indy Quality of Life area (SoIndy).

After extensive community engagement, Big Car decided to artistically address a challenge that many residents of the SoIndy area face; no desire to use alternative transportation because they do not feel that there is anything close enough to walk to from the bus (or they simply don't realize there is a bus stop close by). They also wanted to target riders from outside the area who may not be familiar with destinations, amenities, or the existing culture of the SoIndy area. Based on their engagement activities undertaken in the spring and summer, Big Car is creating wayfinding sculptures placed at the future transit stops that provide time and distance estimates to both typical and more outlandish destinations that are within a short bike or walk (0-1 mile distance) from the transit stop. Seeing their suggestions take the form of wayfinding that respects their connection to the neighborhood should encourage local residents to take ownership of the Red Line as it goes through “their” community. The sculptures also host Red Line information, maps, and a specially curated playlist of songs particular to that stop, accessible through Spotify.

Jamie Pawlus
Jamie Pawlus lives in Fountain Square, which will have one Red Line stop at the intersection of Virginia and Woodlawn. In her practice, Jamie is inspired by how people react with/to objects in their environment that are often mass-produced and placed by “authorities” for transactional purposes; she uses the form of these objects to subvert their authoritative nature and personalize the way people interact with them, often injecting humor and whimsy into the experience. Jamie realized that she had never ridden a bus in Indianapolis because she didn’t know when it came, where it stopped, or whether it would fit into her lifestyle; she thought that many people might be feeling the same way.

Jamie created a temporary sculpture called Coming Soon….Seriously at the Virginia/Woodlawn stop. The sculpture rises high above the other street features to form a beacon for the Red Line station. The text reflects two meanings: one, that the Red Line is under construction and will be implemented shortly; and two, once constructed and operational, a bus will be literally “coming soon” due to the 10-minute frequency of the Red Line. The “Seriously” text is a humorous comment reflecting the long time the Red Line has been discussed, acknowledging the controversy in the city about its coming, and that it is finally becoming a reality. A third level to the concept is that Fountain Square is on the part of the Red Line corridor that will not be operational for up to a year after the stations are built: the sculpture alludes to the fact that soon the line will be in service, and patience will be rewarded. The sculpture will be installed through December 2019, after the anticipated start of Red Line bus service.

Sapphire Theater Company’s practice involves using a variety of visual and performance techniques to engage community in difficult conversations and enable them to imagine themselves in alternative scenarios to demystify the “what if” aspect of cultural change. STC felt that points of discomfort—such as being on a bus with strangers that you may have nothing in common with, or not knowing where the bus will stop and whether it will take you to where you need to be—could be stopping the community from fully engaging with the Red Line. David Orr, the STC artist representative for this project, wanted to create a way for future riders to “pre-visualize” what the Red Line experience will be like so that they would feel more comfortable taking the new transit mode and incorporating it into their lives.

Sapphire Theatre Company developed A Beautiful Ride: an artistic film depicting a rider’s journey along the 13-mile Red Line, visually highlighting the frequency of the system, locations of stops, key destinations, services and institutions along the way. The film, shot on video using a time-lapse technique, also has music that was selected and adapted to reflect the different cultures of the various neighborhoods along the Red Line. The “actors” are real transit riders, and participating in the creation of the film enabled them to “rehearse” their individual Red Line experiences.

Andrea Smith
During her childhood, photographer Andrea Smith’s family was transit-dependent and she grew up using the IndyGo system to get where she needed to go. Although she was personally well acquainted with the system and knew where it could take her, she realized that not everyone felt that the bus could represent freedom and the opportunity to discover new places. She wanted to create a project that encouraged people to explore beyond their comfort zone, and which emphasized that the Red Line “opened doors” to other neighborhoods and experiences that could make their own lives more multi-dimensioned.

Carlos Sosa is a graphic designer who is familiar with IndyGo and transit culture. He wanted to do a project that reflected the deeply ambiguous cultural feelings people have towards riding the bus, and to highlight the different types of Red Line riders (frequent riders, never-rode- before, ride-when-necessary, and even, yes, Red Line haters) and their feelings about themselves and the Red Line.

Carlos’s “Still, I Ride” poetry project was inspired by the Maya Angelou poem Still I Rise, a poem about personal pride in the face of adversity and misconceptions. Using the phrases “still I ride,” “’til I ride,” and “will I ride” as inspiration, riders’ own poetry communicates their stories of challenges and opportunities, with the bus system as the narrative commonality. Through workshops facilitated by professional poets and a supplementary on-line submission process, community members wrote stanzas in the same meter as Still I Rise. Ten stanzas—to symbolize the 10-minute frequency of the new Red Line bus system—will be selected to collate into a booklet and set of posters that will be widely distributed free of charge all along the Red Line corridor. The authors’ photographs will be displayed with the poetry to communicate the wide variety of people in Indianapolis for whom the bus is a significant element of their lives.


Look for projects to appear along the Red Line starting in June 2018 and continuing through the end of the year. 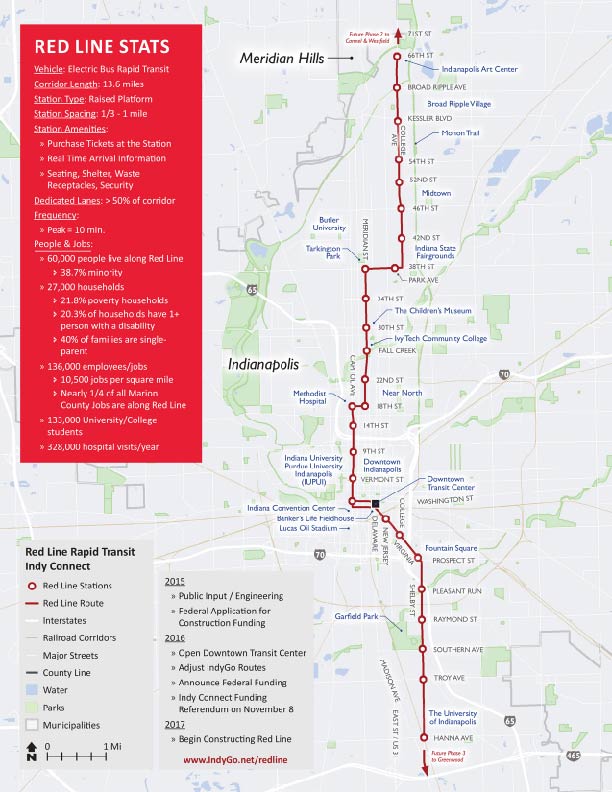 The Purple Line Artist in Residence is Wil Marquez and his firm w/purpose.

Wil is an urban designer and architect who obsessively practices community-engaged design. The Purple Line will eventually replace the existing Route 39, IndyGo’s most populated and arguably most diverse current route. Wil and his colleagues at w/purposed assisted IndyGo in meeting the challenge of reducing the number of stops and making sure that the route design will still meet the needs of people living along the route.

The team created the “purple pinwheel” concept as both a conversation starter and a way for the community to show their support for the project. Pinwheels at different scales were designed as kits by w/purpose and assembled by community members at numerous engagement events all along the Purple Line corridor, both with IndyGo and at community celebrations, and the larger pinwheels were used in installations that marked significant community destinations. Some of the pinwheels incorporate handwritten comments, which were communicated to IndyGo’s Purple Line design team. Many more people were able to be reached through this simple activity than would normally attend formal IndyGo community meetings, and people were able to associate fun and camaraderie with their future transit infrastructure. Wil’s work includes creatively engaging with communities along East 38th St. from January through July, 2018. 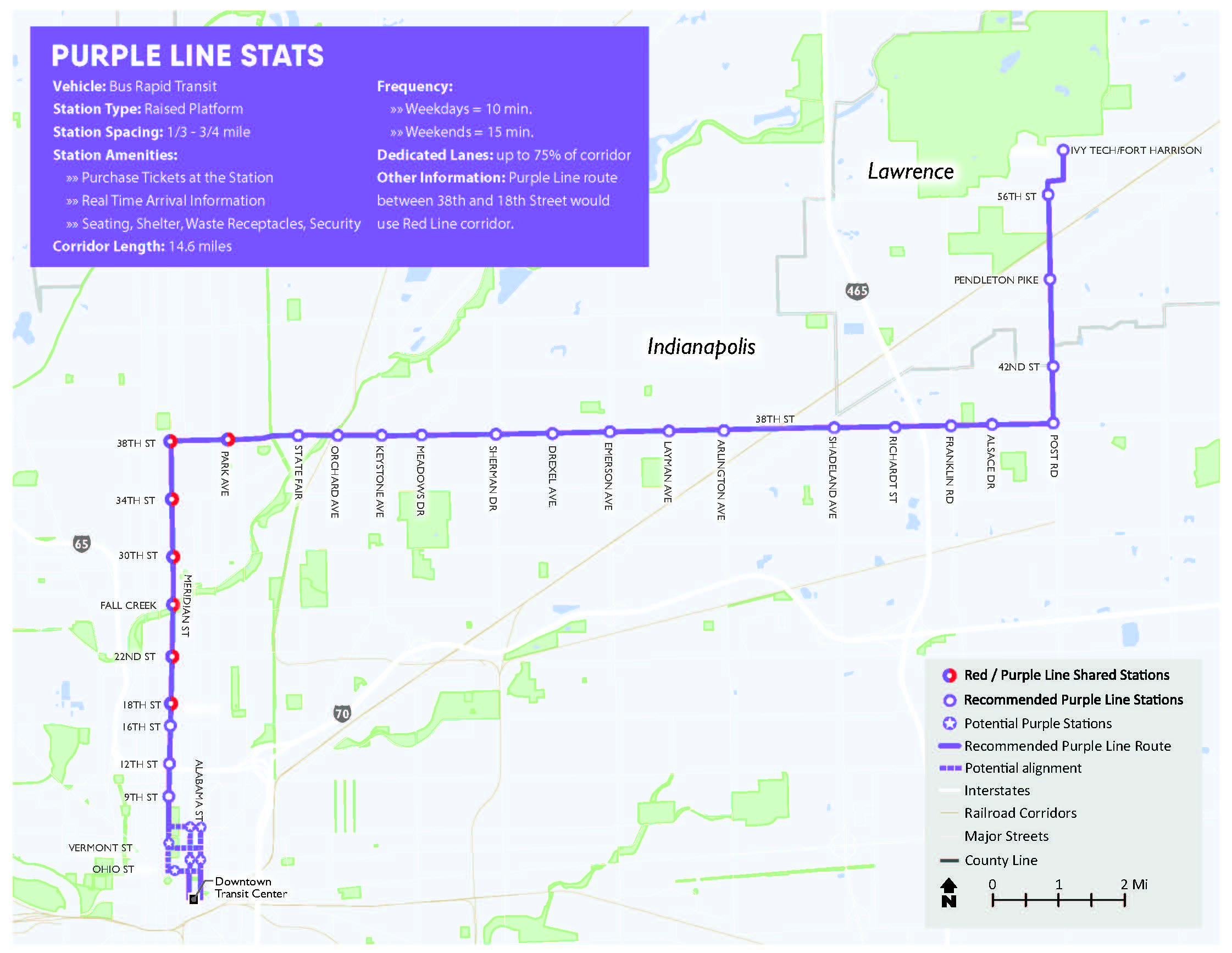