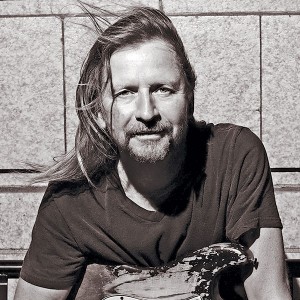 “Being chosen for the program meant a lot to me. It helped to validate what I do. I have always approached my music as art, but when slugging away, year after year, trying to make a living, it is easy to become frustrated and lose sight of one’s original vision. I felt invited into the arts community and renewed for that.”

Gordon Bonham first picked up a guitar at the age of fifteen and was instantly hooked on the blues. Today, he is one of Indianapolis’ premiere blues guitarists, singers, and songwriters. Performing over two hundred shows a year and working with legends including Joe Willie “Pinetop” Perkins, Robert Lockwood, Jr., and Matt “Guitar” Murphy, Gordon has built his life around the genre. Gordon’s goal for his fellowship was to learn to play the clawhammer banjo and explore why this instrument, of African origin, was not heard in blues.

Gordon spent countless hours on clawhammer banjo lessons and research of the banjo and its history. He also had a tremendous opportunity to experience music at concerts and fiddle festivals. Music by day and camping and music by night, he quickly became known as the “‘blues guy’ interested in banjo.” He spent time enjoying the artistry of other musicians; a luxury not often afforded to him while performing. One of his most rewarding encounters was meeting the Carolina Chocolate Drops before one of their performances. This young, energetic, African American group features fiddles, banjos, and guitars, was gracious in sharing their music with Gordon. They conversed at length about what elements kept banjo out of the blues. While he did not find definitive answers to his questions over the course of his research, he was able to formulate his own conclusions, learned to play the clawhammer banjo, and realized that he was improving his skills as a guitar player. “I believe I definitely experienced renewal with getting out of town, camping with my family, and spending several days at a time totally immersed in music.”

Toured in Europe with harmonica master Gary Primich and with his band, Cooler Kings
Served as band leader and organized three groups to perform with Bo Diddley
Worked with James “Yank” Rachell, one of the most influential blues artists of the 20th century