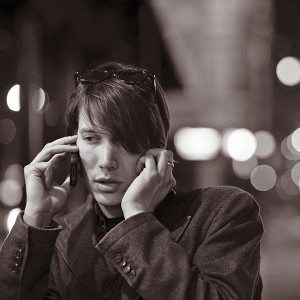 “For me, a studio is like a blank canvas. It gives me a place to renew, take risks, generate work, share and experience, get stressed, and problem solve.”

Photographer Justin wanted to find a creative space to call his studio. He felt his work had come to an impasse, as he was not able to create both the life-size and miniature theatrical environments that are the subject of his photography. “I think of my work as visual narratives or as scenes that represent existential dilemmas.” For Justin, having a studio space allows him the opportunity to shrug off the daily struggles and responsibilities that creep in when working at a home studio. “After working in studios versus at home, I’ve realized that I work best when I’m in a space that gives me the freedom to bring in random objects, visit with other artists, and incorporate the unexpected.”

Through his Creative Renewal Arts Fellowship, Justin leased a studio space in the Circle City Industrial Complex for a year. With the freedom to use the space to its full potential, he created larger scenarios to photograph and had a space to exhibit his work during IDADA First Friday Art Tours. He also challenged his craft through an artist residency at Atelier Boba in Montmartre, Paris. For Justin, the highlight of his renewal was Deprivation Tank where he and another photographer lived and created artwork in his studio for sixty hours. He took over four thousand photographs and created a five-minute, time-lapse movie of their project.