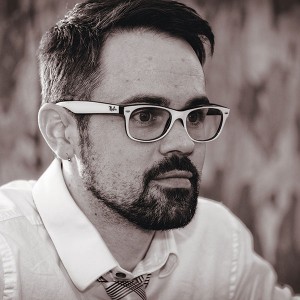 “The renewal has been full of twists and turns and all of them have helped me grow artistically….And it’s been scary, and exciting, and fulfilling, and risky, and just, really…truly…great.”

In addition to his artistic and academic work at Franklin College, Gordon creates designs for theatres and produces art in all sizes, shapes, and forms. For his Creative Renewal, he wanted to research public art and how it is viewed in different cultures with the goal of developing curriculum for classes and creating public art in Franklin. Gordon received his Creative Renewal acceptance letter the same day his beloved grandfather passed away. Instrumental in Gordon’s life, the ninety-six-year-old, decorated World War II veteran was a hero to him. When he received the letter from the Arts Council of Indianapolis, he knew it was a rejection letter for the fellowship. Instead, it was an acceptance letter. A day of loneliness and sorrow punctuated by a simple letter saying ‘We respect you, your art, and your ideas. Go…go and create and grow.’”

From that moment on, Gordon did just that. He and his family planned research trips and project ideas related to public art. During his travels, he conducted research, created art, and spent amazing time with his family. He developed an idea about a play on scale and the Diminutive Man was born. “We really are smaller than we would like to believe. So, the Diminutive Man Series undertakes the recreation of a world of whimsy and humor that emphasizes the scale of the world (or galaxy!) next to a lone ordinary (if ill-dressed) man.” He started to share his new work with friends and family and soon had a solo show in Los Angeles. A solo show at Indy Reads Books culminated in a request to submit a story on the Diminutive Man for their new anthology, Indy Writes Books. He has traveled and researched extensively, bonded with and artistically inspired his family; started work on large-scale sculptures in Franklin; and has plans to paint a mural of his grandfather in uniform.