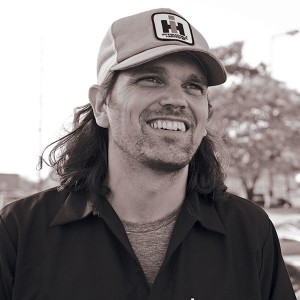 “An artist can have work that is about more than self expression, work that is really focused on the experience for the audience—the ones who find the pieces I leave behind. And the artist can let go of control and not care so much about credit and collaborate with people they don’t even know or see. The conversations I had about this were surprisingly powerful and I am hopeful that I am able to continue to help more and more people understand that there’s a much larger idea of what art is today and that this idea has been around a while and it’s a great opportunity to really apply great ideas and creativity.”

Jim, artist, poet, photographer, and Big Car Collaborative Executive Director, wanted to renew with a project that focused on bringing art to people, wherever they were. Called Here Here, the project featured photographs taken around the country and in central Indiana in unique places like grocery stores and gas stations. He took photographs of locations and then placed the unsigned images in the same location to spark conversation and intrigue. For Jim, he was creating a “doubling and a loop of perception.” He was able to build in time during his work and travels to focus on this ongoing project, not just leaving it as another idea in his notebook.

The travels that were the most impactful for Jim were the ones with his family. They traveled to Kokomo, the city of his birth, for two visits and the whole family helped him with the process of getting permission from the businesses to participate in the project, taking the images, and placing them onsite. He loved that his son helped with one installation at a hotel pool and his daughter helped him with a Pizza King photo project. They journeyed together on a three-week summer driving trip and visited New York City, Cleveland, Washington, D.C., Baltimore, and Philadelphia. They stayed at the majestic Mohonk Mountain House and slowed down, saw the world, and explored nature through hiking, swimming, and paddling. “I’m passionate about sharing stories, knowing people, highlighting places, paying attention to details, living my life in such a way that I am able to improve other lives through what I can do— write, make art, and help make things happen that would not have happened otherwise.”